Forest of Dean District Council reports a rise in performance

5 million more plastic bottles recycled in the Forest of Dean 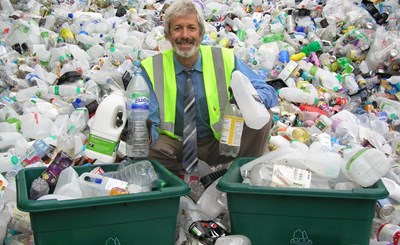 One year on following the introduction of its revitalised kerbside recycling service, the Joint Waste Team at the Forest of Dean District Council reports a dramatic increase in materials collected from households for recycling.

Alongside the changes, a fortnightly collection of small electrical appliances was introduced enabling residents to recycle items such as toasters, kettles, irons and other small electrical and electronic gadgets from the kerb on the same day as their refuse collection.

Figures for the period 1 August 2016 to 31 July 2017 show a 139% increase in the weight of plastic bottles collected; an uplift of 276 tonnes based on the same period for the previous year. This is the equivalent to five and a half million more plastic bottles being recycled in the district.

During the same period, an extra 1,325 tonnes of cardboard and paper were collected – an increase of 59% on the year before.

Councillor Chris McFarling, Cabinet Member for the Environment at the Forest of Dean District Council said: ‘While residents could recycle their plastic bottles, cardboard and unwanted clothing before the new service was launched in August last year by using the recycling banks and at the local Household Recycling Centre, it is clear by making the service more accessible we have seen a vast improvement in the amount of rubbish which is now being recycled.’

Glass, while already collected at the kerbside under the old fortnightly scheme and through the network of recycling banks, rose by 470 tonnes overall - an increase of 21% - in the past 12 months. Tins, cans and aerosols rose by 3%.

Although there was no change to the weekly food waste recycling service offered, the team reports that this has also seen an increase in performance with 5% more waste being collected.

Cllr McFarling continued: ‘This improvement in performance is great news for Forest of Dean residents and means we are capturing more materials than ever before, helping reduce costs to the tax payer and keeping waste out of landfill. Since the new service, we have experienced a 6% reduction in the amount of black bin rubbish too; that’s the equivalent of 85 fewer refuse truck loads.  We are delighted that the district’s performance has also contributed to Gloucestershire as a whole exceeding 50% recycling for the first time ever in the last financial year.’

‘We would like to thank the public for their continued efforts and ask that they keep up the good work of separating their recyclable items into the different containers. This helps the loading of the materials in to the different pods on to the trucks and maintains the high quality of what we collect so that items can go on to be recycled again and again. ’

Householders are reminded that their plastic bottles, metal tins, cans and empty aerosols should be put out into one recycling box with a second box being used for glass bottles and jars and any small bags of clothing and paired shoes. Paper and cardboard should be presented in the blue weighted sack.

Recycling containers can be ordered from the district council by calling 01594 810000 or online at www.fdean.gov.uk