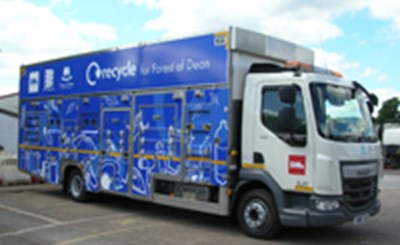 Residents in the Forest of Dean will be able to recycle their plastic bottles, cardboard and unwanted textiles from the kerbside as part of the District Council's new weekly recycling service which starts on Monday 1 August.

The current collection for glass, cans/tins, aerosols and paper will also move to a weekly pick up from the start of the month.

Alongside this, the Council is introducing a fortnightly collection for small waste electrical and electronic equipment (WEEE), items such as toasters, kettles, irons, dvd players, cameras, hand-held power tools and mobile and digital phones, which will also include household batteries.  These items will be collected on the same week as the refuse collection and should be presented for collection in a standard-sized carrier bag and left on top of the black wheeled bin.

Councillor Marrilyn Smart, Cabinet Member for the Environment at the Forest of Dean District Council said: 'Next week (1 August) marks an exciting new chapter for kerbside recycling in the district.  We are delighted to be expanding the materials which residents can recycle from the kerbside, particularly for plastic bottles and cardboard, which we know some residents have struggled to take to their local banks for recycling in the past.'

'We have been working with our waste contractor Biffa to implement these changes, which have been possible due to new recycling vehicles being available on the market.  The new Romaquip fleet will allow the collected recycling to be kept separate on the vehicle thereby maintaining the quality of what it is collected, which is why we are asking residents to use both their bag and boxes to put their items out.'

The fortnightly garden waste and refuse collections will remain unchanged.

Food waste will continue to be picked up weekly but will now be collected using the Romaquip vehicles.

Anyone who has not received an information leaflet about the changes can download one by visiting www.fdean.gov.uk or call the district council on 01594 810000.

Blue bags and recycling boxes can be ordered by calling the customer services team at the council or by emailing council@fdean.gov.uk