Everyone visiting the Household Recycling Centres are required to pre-book their visit.
This is to minimise queues and congestion on site and to help keep everybody safe.

What do we do with household residual waste?

We used to send household residual waste to landfill, but we recognised there had to be a better way to manage our waste rather than burying it in the ground. In 2019, the Gloucestershire Energy from Waste (EfW) facility became fully operational. 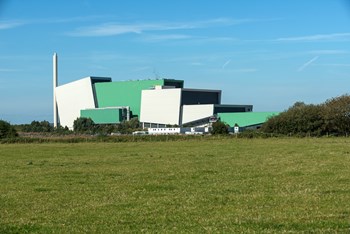 The facility combusts waste at temperatures over 850°C. Heat from the combustion process is used to create steam, which can then be used to make electricity by turning a steam turbine. Gases, such as nitrous oxides and fine particles are also produced from the combustion process. These emissions are carefully controlled and the air is cleaned by a sophisticated air-pollution control (APC) system before it is released in the atmosphere.

The ash (materials that don’t burn, like stones, glass and metal (collectively known as incinerator bottom ash)) goes to a dedicated storage hall on site, where it is sorted into different sizes and the metals are separated from the rest of the ash.

The facility can treat a maximum of 190,000 tonnes of waste per year. Any spare capacity after our household residual waste has been treated is made up from business waste. Having this facility means that over 90% of our household residual waste is diverted from landfill, it generates enough electricity to power around 25,000 homes and it recovers ash and metals from the process that can be recycled.

The Gloucestershire Energy from Waste facility has launched a new film demonstrating how the facility works. The film describes the energy from waste process and follows the journey household residual waste takes from the facility’s weighbridge and tipping hall to its combustion and production of electricity which helps to power homes across Gloucestershire. The short film is available to watch on UBB's website.

Did you find what you were looking for?